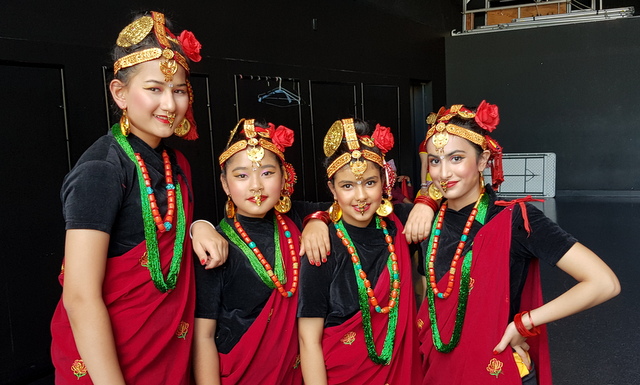 A foursome from ADS’s Nepalese Cultural Dance Group scored the 1st Runner Up title in the Group Dance Category at the Nepalese Dance Competition Australia in Brisbane in late September.

Rivica, Sukriti, Sarina and Simon competed against a host of dancers from around Australia and New Zealand. Input from their choreographers and mentors Anjeela BK and Pushpa Lamichhane was critical to their success.

‘The four young people danced beautifully and did really well to be runners up in this hotly contested category,’ said ADS’s Nepalese case worker Rishi Acharya. ‘We’re so proud of them.’

‘Watch the video to see how well they performed!’

Mr Acharya said the group had received logistical support from the Nepalese Australian Association to take part in the competition, and that their parents were ‘the backbone of this wonderful journey.’

‘People’s commitment to Nepalese Cultural Dance Group shows the importance they place on keeping their cultural heritage alive in Australia,’ he said. ‘And ADS is happy to support the group in its endeavours.’