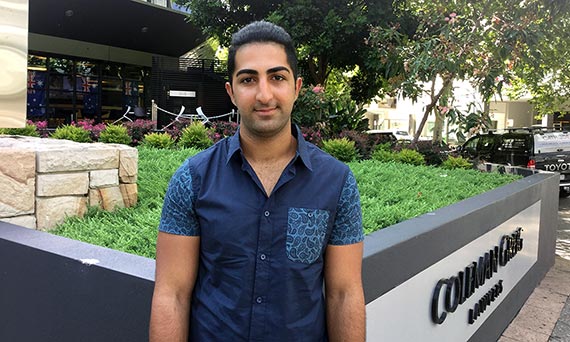 Arash Bordbar, an Auburn Diversity Services (ADSi) Young Advocate, has been selected by the Refugee Council of Australia and Multicultural Youth Advocacy Network to represent refugee youth in Australia at the Global Refugee Youth Consultations held by UNHCR in Geneva, Switzerland, in June 2016.

Mr Bordbar, originally from Iran, arrived in Sydney in May 2015 after spending five years in Kuala Lumpur, Malaysia, as a refugee.

During his stay in Kuala Lumpur, he volunteered for two years through UNHCR programs supporting other refugees in their transition to a safer place. He worked as an interpreter for the Iranian and Afghan asylum seekers and gave them one-on-one support, from legal help, health benefits, seeking employment and court hearings for their applications.

He completed secondary education and a diploma before relocating to Australia. He spent most of his time looking for jobs but found that difficult due to lack of local work experience.
Mr Bordbar has been involved with ADSi as a Young Advocate since being referred to ADSi Youth Development Worker Eva Orio in September 2015.

Mr Bordbar was very motivated and attended skill development workshops, was involved in recreational and community activities such as excursions and a youth camp organised by ADSi, and joined the working group to plan and organise the ADSi Youth Summit 2016.

He attended English classes at TAFE in order to gain access to university in 2016.

Although Mr Bordbar is starting Civil Engineering at Western Sydney University, he has a genuine interest in continuing to support refugee youth and being an active agent for social change.
He will be hosting a series of consultations in Auburn at the 2016 Youth Summit “Open Minds, Open Arms: Promoting Cultural Harmony across all communities in Sydney” on Wednesday March 30.

The summit is organised by ADSi in partnership with other local migrant resource centres, the Auburn City Council, local schools and stakeholders.

Mr Bordbar said Ms Orio was very helpful and attentive to his questions and always went out of her way to make sure he understood everything.

“I hope to be able to represent youth in Geneva and, with the help of Eva, I am very confident that I will do a good job,” he said.