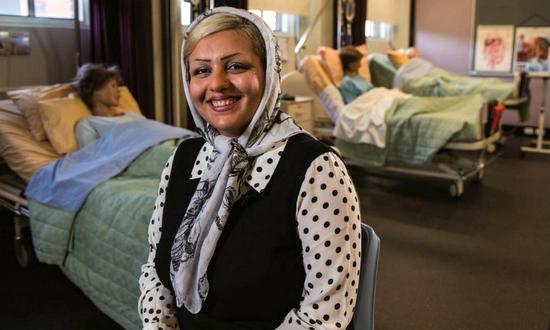 An Afghan refugee who arrived in Australia with no English language skills has received an Institute Excellence Award at the 2016 Hunter TAFE Awards plus the Cultural Diversity prize, proudly sponsored by Northern Settlement Services (NSS).

Despite experiencing years of hardship in a refugee camp, Kahdijeh Ebrahimi, who arrived in Australia as a refugee from Iran in 2013, has overcome adversity thanks to her hard work and commitment to succeed.

Described by her teachers as “a hardworking, gifted language learner”, Ms Ebrahimi completed the Preliminary Course and Certificate I in Spoken and Written English within a year. Each of those courses is supposed to take one year, but Ms Ebrahimi managed to complete them in half the recommended number of hours.

She is now well on her way to completing a Certificate 111 in Spoken and Written English.

“It was just commitment to her studies and a preparedness to practise her language skills wherever possible that allowed her to do this,” her teacher, Paul Robertson, said.

Ms Ebrahimi has successfully balanced her studies while managing the commitments of a young family in a new country. She hopes to follow her dreams and become a fully qualified nurse.

“Being a refugee is hard but winning an award means that all my pain and troubles in leaving my country to find peace here have been worth something and that all my hard work is recognised by people in Australia,” she said.

The Hunter TAFE Awards were held at the Crowne Plaza, Terrigal, on May 6.

NSS is proud to be associated with Hunter TAFE in recognising the outstanding achievements migrants and refugees make during their settlement process.