Families share their courageous journeys in celebration of Refugee Week 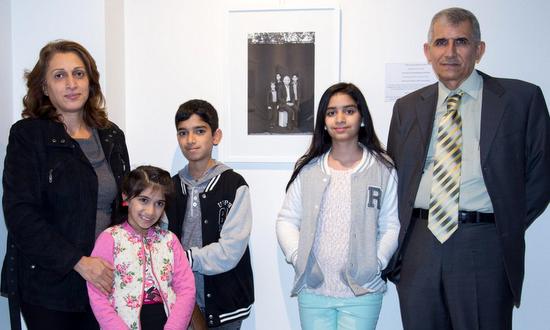 It was an evening of storytelling and strength.

Over 70 people attended the launch and special tribute was paid to the participant families who, for the most part, were also present on the night.

“We are honoured to witness a snapshot of their journey and thank them for sharing it with us,” said LMRC CEO Kamalle Dabboussy.

One member of a participant family, Mr Muthanna Al-Badri, took the opportunity to share with the audience details of his journey from Iraq to Australia. He spoke with eloquence and emotion while showing his appreciation for the support he and his family had received since their arrival in 2014.

The Al-Badri family was among eight other families who took part in the project, having resettled in South Western Sydney.

The families, who came from Cambodia, Iraq, Sudan and Syria, posed for the photographs while sharing moments they were most proud of and their hopes for the future. They were displayed alongside each family portrait with the aim of illustrating their human commonalities.

It was not the end of the Courageous Journeys story but the beginning of a two-part project celebrating the refugee journey through art.

“All the families in these portraits have been given cameras and are taking pictures of their lives; things that inspire them and make them happy. We will then be collating these images, along with the portraits, into a book, the sale of which will go to local community projects at the end of the year,” said Mr Dabboussy.

Deacon Sam Gennaoui of the Melkite Catholic Welfare Association said that, as they explored the images and stories, the audience “may recognise something of themselves or their own family”.

Refugee Week is Australia’s peak annual activity to raise awareness about the issues affecting refugees and celebrate the positive contributions made by refugees to Australian society. Originally celebrated in 1986, Refugee Week coincides with World Refugee Day (June 20). This year, 2016, Refugee Week was held from June 19 to June 25.

The theme for Refugee Week for 2015 to 2017 is “With courage let us all combine”. Taken from the second verse of Australia’s national anthem, the theme celebrates the courage of refugees and of people who speak out against persecution and injustice.

It serves as a call for unity and for positive action, encouraging Australians to improve the nation’s welcome for refugees and to acknowledge the skills and energy refugees bring to their new home.

The Courageous Journeys: A Family Portrait project was funded by Settlement Services International (SSI) with photography by Saskia Wilson, http://www.saskiawilson.com/