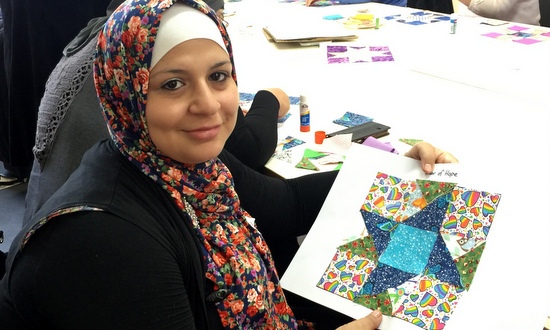 Prompted by a parish member’s connection with Metro Assist in Campsie (a member of the NSW Settlement Partnership), the church invited about 80 people from the Middle East, Africa and Asia over to Vaucluse for lunch.

This was so successful that a number of return events have been held, including a women’s morning tea in Campsie and a lunch for smaller groups of St Michael’s members in refugee family homes.

Another women’s morning tea is planned at Vaucluse for later this month, and another lunch later in the year.

“It’s absolutely brilliant,” said the CEO of Metro Assist, Lou Bacchiella. “We’ve been working with these people for the past 18 months to two years. St Michael’s was absolutely wonderful in extending the invitation to the lunch just before Christmas and things have just gone on from there.

“That simple contact through lunches and joint activities helps people assimilate into their new land far more quickly than if they had no-one else to speak to except people from their own community.

“And it’s not just feeling more comfortable with their new circumstances but, from the broader perspective, others understanding what some of these people have gone through as refugees.

“It’s something we’re very keen to continue and I think the commitment and discussions have been around what other sort of support activities St Michael’s could provide to assist people.”

The rector of St Michael’s, the Rev. Michael Palmer, said members of the parish had been keen to be involved with refugee support “but in Vaucluse we’re a long way — let’s face it — from where people are initially going to be housed.

“It was decided the best way of helping our own people here would be to have any preconceptions about refugees and who they are broken down and to extend a hand of welcome.”

The first lunch included the chance for small groups to sit, eat and talk together, for the gathering to hear refugee stories, learn more about each other and for the opportunity to provide simple gifts to the refugee children.

“It was also a halal meal so that went down really well,” Mr Palmer said. “When I held up the halal certificate the refugees just cheered. It was a really sweet moment actually, when they realised they could fully participate in this meal.

“We believe that the tensions and divisions that exist within the community are not religiously based. It’s not religion that is the great evil in society and we want to demonstrate that Christian people and Muslim people can actually share space peacefully. Some people in Sydney might see this as being soft but I see this as very powerful.”

For parishes that might be looking to do similar things but aren’t sure where to start, Mr Palmer suggested thinking about who in their congregation might have natural links to another church or area where there were greater numbers of refugees. He also advised getting help from those with more expertise, such as Anglicare’s refugee service.

“In the end, for me, it’s simply a factor that we share space together as a community,” he says. “We make no forward ground unless we build friendships and appreciate each other as neighbours, friends and brothers and sisters in humanity. And we don’t make forward ground on opportunities to share our faith unless we’re prepared to reach out in friendship. It’s at all those levels.”

This article was first published in July Southern Cross. Reproduced with the permission of Anglican Media Sydney.