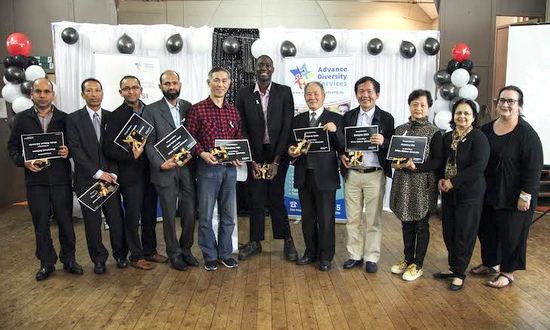 Raju Manandhar was one of the eight newly graduated White Ribbon Male Advocates in the St George and Sutherland region from Nepalese, Bangladeshi and Chinese background who became community role models to champion the prevention of violence against women at White Ribbon Night, July 28, at St John’s Anglican Church, Rockdale.

Mr Manandhar said, “I am more than proud and humbled to participate in this highly significant White Ribbon Night program. As a White Ribbon Male Advocate, I believe that we have more serious responsibility to contribute to the overall success and good will of the campaign.”

Supported by Advance Diversity Services (ADS), Mr Manandhar and the other advocates are the result of a Women NSW funded Domestic and Family Violence Community Education Project targeting Nepalese, Bangladeshi and Chinese community.

With the objective of changing attitudes towards the right to live a life free of violence, increasing knowledge on supportive community and legal systems, and better appreciation for respectful family relationships, ADS conducted various information sessions for women and men including the recruitment of the White Ribbon Male Advocates and the development of a Domestic Violence Male Advocates Tool.

White Ribbon Night is an annual event on the last Friday of July to raise awareness and funds to support the work to end men’s violence against women.

A Domestic Violence Male Advocates Tool designed by the advocates was also launched. The tool was supported with additional designing costs contributed by Georges River Council.

ADS’s Settlement Services Program has a strong focus on family relationships for newly arrived migrants and refugees in the region and supports White Ribbon Australia in its community campaign to Say NO to Violence.