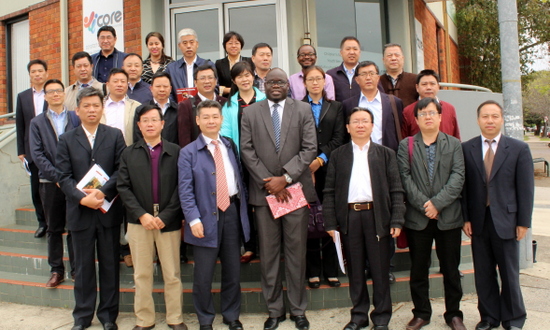 He was accompanied by 23 senior officials from the Ethnic Affairs Commission across China.

Clement Meru (Manager-Multicultural Communities), Morlai Kamara (Community Development and Policy Officer) and Shama Pande (Settlement Services Team Leader) welcomed the delegation, which had an interest in Australia’s policy on multiculturalism and how government programs supported the integration of refugees and migrants.

Mr Meru gave the history of CORE Community Services and an overview of the support that the organisation provided to waves of refugee and migrant communities in Fairfield over the past 38 years.

The delegates were interested in how community organisations were funded in Australia and how the society dealt with cultural and religious diversity.

Mr Meru highlighted some key initiatives, such as Harmony Day and Refugee Week events that celebrated diversity and the contribution of refugee communities in Australia.

“Australia experiences a significant level of community harmony due to the strong partnership that exists between the community and the government at all levels,” he said.

The visit was coordinated by Macquarie University as part of a short training on Ethnics Relations and Multiculturalism.