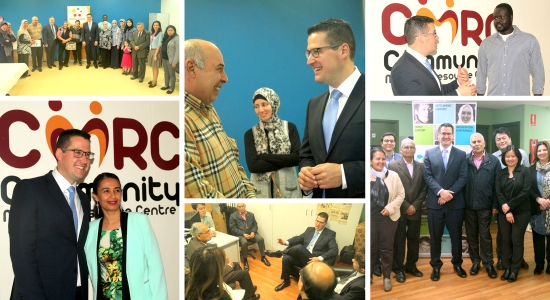 At Metro Assist, Campsie, he spoke with managers and met participants at an NDIS information session for members of the Arabic-speaking community.

Around 25 parents who had children or a family member with a disability attended the session. It was helpful for clients and for Metro Assist to understand what their needs were.

One father told the minister how grateful he was and what a great job the senator was doing for a great nation. He also described the services at Metro Assist as “perfect”.

Senator Seselja continued his visit with a stop at Auburn Diversity Services Inc., where he heard how ADSi was uniquely responding to the settlement journey of young people, through support, motivation and pathways to employment.

He concluded his NSP visits at the Community Migrant Resource Centre at Parramatta — which this month notched up its 20th anniversary.

Senator Seselja said he was new to his role and wanted to see firsthand what was going on and where the gaps were.

He said he looked forward to continuing the relationship and to building better outcomes.