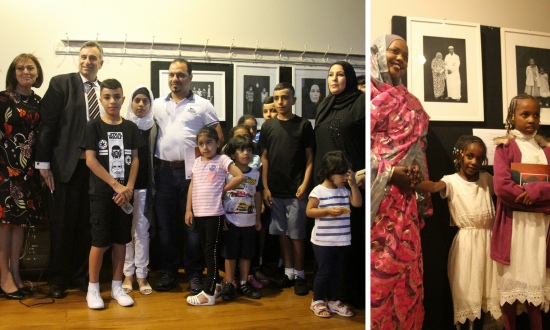 Two busloads of refugee families travelled from Liverpool to an exhibition in Glebe for the launch of Courageous Journeys: A Family Portrait on November 16.

The book, published by the Liverpool Migrant Resource Centre (MRC) and the Melkite Catholic Welfare Association, captures the refugee experience in South West Sydney through a series of family portraits by photographer Saskia Wilson and images and stories contributed by participating families.

The project, including an exhibition during Refugee Week 2016, offered Australian families from a refugee background an avenue to shine a positive light on their individual stories of struggle and hardship, yet also their courage, optimism and hope.

Liverpool MRC CEO Kamalle Dabboussy said, “We are here celebrating the courageous journeys of people who have come to Australia because courage is found in the most unlikely places.

“In the journey that people take we find courage and resilience; we find our heroes reflected in these stories and these photographs.”

He said when Liverpool MRC and the Melkite Catholic Welfare Association conceived the project staff members were in awe of people’s individual stories and wanted to capture and represent that to the mainstream community.

After initial photographs were taken by Saskia Wilson, the families were given a camera and asked to document their stories and journeys in their own words. The results were curated and published as Courageous Journeys.

Mr Dabboussy said launching the book in Glebe was an attempt to broaden its audience, make connections and build networks.

Deacon Sam Gennaoui, Business Manager at the Melkite Catholic Welfare Association said, “Refugees face difficulties and challenges when they first arrive, especially the adults, in terms of the language, culture and mindset. If they were born and raised in a Middle Eastern country, fitting into an Australian way of life requires a lot of change. It’s a big issue and we need to find ways of transitioning into an Australian way of life and Australian culture.

“So it’s very pleasing reading the book; it’s very exciting to see the success they have made.”

He said, “Australia is a country of immigrants. We have all been through that one way or another. So well done to those who have come and made a success of it.”

All proceeds from the sale of the book will be reinvested into community projects benefiting newly arrived refugees in South West Sydney.

Jane Stratton, Director of Think+DO Tank, spoke at the launch about one such project, Lost in Books, which will open in early 2017.

She said Lost in Books would be a beautiful, joyful community hub that celebrated literacy, with new and second hand children’s literature in community languages.

There will be an artistic program, a creative learning and language acquisition hub, a women’s café and a connection with Liverpool West Public School, which has a transitional class for newly arrived refugee children.