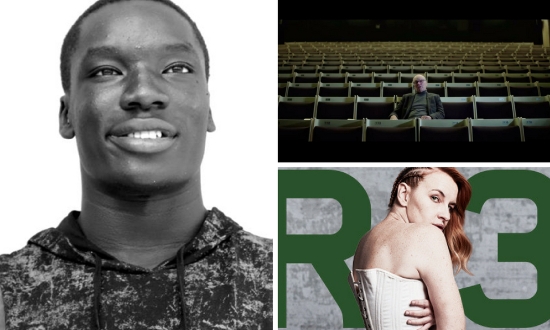 The scholarship gives young aspiring actors from remote and regional areas in Australia the opportunity to learn and perform Shakespeare with some of Australia’s best known Shakespearean actors.

Joel will join Evelina Singh and Nikhil Singh from Queensland for one week at Bell Shakespeare HQ in Sydney, in January 2017.

The week will culminate in Joel, Evelina, and Nikhil, all 17 years old, being mentored by John Bell, who will workshop their winning monologues and give them masterclasses focusing on voice, movement, and language.

One hundred and seventy-nine students across Australia auditioned for the scholarship. They were marked on performance skills including voice, movement and their ability to take direction. Of those, 17 were shortlisted year and asked to film their monologues.

Joel’s monologue was from Hamlet.

“My first thoughts are, why me?” said Joel, who was five years old when he, his parents and siblings arrived in Australia as refugees in 2004.

“I am in disbelief. My fantasy, of working with someone like John Bell, has become a reality. I have worked really hard and am so excited about taking my acting to a whole new level. I can’t wait to see what improvements Bell Shakespeare will help me make.”

Helen Buchanan, Parenting Groups & Refugee Programs Coordinator at NSS, said, “Joel has had his share of challenges and has worked hard at our homework centres. He has participated in some of our programs and we are proud to have been a very small part of his journey.”

Michael Freund, Volunteer Coordinator (Education Programs) & Project Manager (Homework Centres) at NSS, said, “This is a truly outstanding achievement. Joel has overcome so much hardship in his life and he wholeheartedly deserves this success.”

After watching the video of Joel’s seven-minute monologue of Hamlet and the ghost, he said, “It is a mesmerising, chilling, and sustained performance from a young man who incredibly has only two years’ drama experience at school.

“And to think when he came into our St Pius High School Homework Centre as a Year 7 kid he hardly said a word for about six months!”

While congratulating Joel, Mr Freund also thanked volunteer Lee Hughes for assisting Joel over three years at St Pius with many of his school subjects and then continuing to support Joel academically outside of school through his two senior years. “I’m certain that Lee’s dedication and perseverance has contributed to Joel’s fantastic win.”