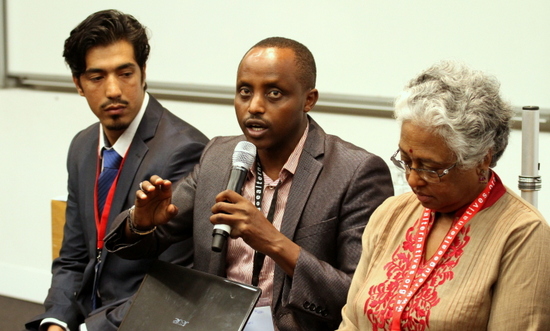 The resettlement of families from a refugee background at Mingoola in regional NSW is a great example of what refugees can contribute to this country, according to Emmanuel Musoni, chairperson of Great Lakes Agency for Peace and Development International.

Mr Musoni was speaking at the Refugee Alternatives conference at the University of NSW on February 23, during the session “Resourceful and Resilient – strength-based resettlement”.

The two-day conference brought together a broad range of expertise covering the topics of displacement, protection, cooperation, wellbeing, resilience, education, advocacy and unity.

Mr Musoni said the story of the Mingoola resettlement program, televised as “A Field of Dreams” on ABC TV last November, was an eye opener for many Australians, including those who lived in rural areas.

He said the former refugees, previously farmers, were grateful to have the opportunity to practise farming activities again. The local community that received the families was also thankful for being able to reopen its school and develop other social capital.

Opportunities for incoming families included exploring various means of agricultural production, employment, a more affordable cost of living, integrating into the rural community as opposed to feeling isolated in urban areas, sharing their culture and being part of local community groups, reconnecting with a rural lifestyle, and developing English proficiency.

There were challenges, however. They included the potentially large number of families to be resettled, casual jobs rather than permanent jobs available, insufficient funds to renovate farm houses, no on-the-ground services to support the families, and misunderstandings due to kinds of English usage.

Nevertheless, Mr Musoni thought the Mingoola program showcased a positive aspect of refugee resettlement and was a way to advocate for all refugees in Australia.