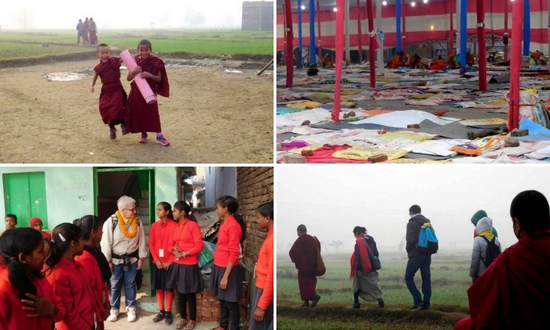 Maria-Elena Chidzey, Coordinator of Northern Beaches Multicultural Services, Manly Community Centre & Services, is so close to her Tibetan friends and clients that late last year they invited her to attend with them one of the most important events for the Tibetan community and Buddhist religion: the Kalachakra Initiation at Bodh Gaya, Bihar, in east India.

Ms Chidzey conferred with her manager and accepted because the experience would extend her knowledge of Tibetan culture. Tibetans are one of the Northern Beaches’ largest communities of new settlers under the humanitarian stream.

Bodh Gaya is the place where Buddha is believed to have attained enlightenment 2,500 years ago. As the cradle of Buddhism, the tiny village is one of the religion’s holiest sites.

The Kalachakra, or “Wheel of Time”, is a very advanced and esoteric practice in Vajrayana Buddhism that can only be given by a Buddhist master. The ritual is given to promote world peace and prepare practitioners for tantric meditations.

Tibetan spiritual leader His Holiness the 14th Dalai Lama, who has bestowed 33 Kalachakra initiations throughout the world, conferred a Kalachakra empowerment in Bodh Gaya from January 3 to 14.

The initiation process spans several days, with the first day being a preparation ceremony, followed by usually two or three days of actual empowerment.

His Holiness, along with the monks of Namgyal Monastery and senior lamas, conducted rituals including the chanting of prayers and creation of a sand mandala. They gave preliminary teachings and, on the last day, the Dalai Lama gave a blessing of longevity and empowerment to the 200,000 pilgrims.

Ms Chidzey said Bodh Gaya was a small town in one of the poorest states of India. It was very dusty and the air so polluted she had to use a mask every time she left her hotel room.

“In the morning we walked through the rice paddocks with hundreds of monks and nuns that had been chanting and praying in the nearby Karmapa monastery.”

The paddocks and roads were full with pilgrims, monks and nuns attending the Kalachakra. There were young men carving Buddha figurines out of stone, and others were selling food, fruit, scarves, toys religious paraphernalia and water.

In the venue there were thousands of people all seated very close together, mostly cross legged on the floor.

Ms Chidzey said she had been told by a friend to take a chair from Australia. “That saved us. There is no way I could have sat on the floor cross legged for up to 10 hours for 11 days.”

The queues were very long and it could take up to an hour and a half to get in. “There were Tibetans from all over the world, including many from the Northern Beaches. Many people, including some of the Tibetans from Dee Why, decided to stay outside the main marque.

“His Holiness was amazing — this 83-year-old man seating for so long with just a cup of tea as sustenance, talking to all those thousands of people seated in front of him plus the ones connected all over the world to the broadcasts translated in many different languages, day after day for 11 consecutive days!”

Ms Chidzey said, “To participate in this amazing event with my Tibetan clients and friends was one of the most moving spiritual experiences I have had in my life and I am very grateful to them for the invitation.”