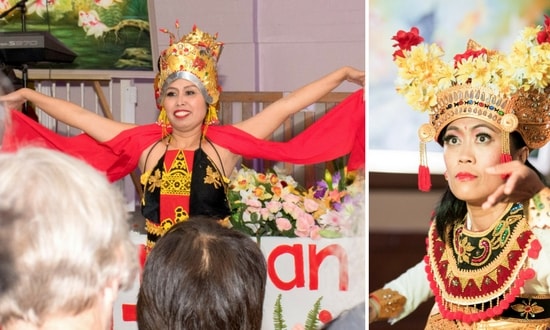 More than 100 people gathered to enjoy music and dancing, and to celebrate Youth Pledge Day’s message of unity, at an Indonesian Cultural Day held in Rockdale on October 14.

The day was organised by the Indonesian Reference Group from Advance Diversity Services and the Indonesian community from St John’s Anglican Church in Rockdale.

It aimed to foster harmony among Indonesian communities across Sydney.

It also incorporated Youth Pledge* Day celebrations to remind people of the great role young people can play as agents of change to bring about a united Indonesia.

The event also provided an opportunity for members of the Indonesian-speaking community in the region to showcase their cultural and other contributions to multicultural Australia, and to engage positively through art, culture and music.

“It can be hard to break down barriers,” she said. “But we know helping migrants to form friendships and bridge cultural divides so they can celebrate and work together on common issues is worth it.”

The bamboo angklung (a traditional instrument) along with a contemporary band with keyboard, guitar and voice, and performances by karaoke singers, also added variety.

Special guests at the event included Yayan Mulyana, Consul-General of the Republic of Indonesia—New South Wales, Queensland and South Australia, and Amin Hady, first chairman of the Indonesian Community Council of New South Wales and founder and chairman of The Foundation of Islamic Studies and Information (FISI).

Attendees were also encouraged to join the recently formed Indonesian Community @ Rockdale, which was launched at the cultural day. The group aims to accommodate the aspirations of Indonesian people in the region and meets on Saturday afternoons at the St John’s Anglican Church Community Hall.

“The day was a real success, with positive feedback,” said Ms Dwipasatya. “People found it informative and entertaining. They also said it helped them to feel more connected, and to be confident about the services available to help them in their communities.”

*The Youth Pledge (Indonesian: Sumpah Pemuda) was a declaration made on October 28, 1928, by young Indonesian nationalists in the Second Youth Congress (Indonesian: Kongres Pemuda Kedua). They proclaimed three ideals, one motherland, one nation and one language. Youth Pledge Day is celebrated annually to remind people of the great role young people can play as agents of change to bring about a united Indonesia.