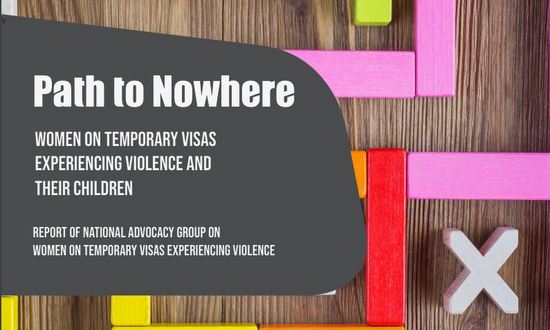 “Path to Nowhere”, a report released on December 10, draws attention to the obstacles faced by women experiencing family violence while living on temporary visas.

“Path to Nowhere” found women and their children with temporary visas face specific barriers to seeking support, including fear of deportation, loss of custody of their children, a lack understanding of their rights and limited English language skills.

Those barriers are often used by perpetrators of violence to maintain power and control over women on temporary visas.

A survey distributed to service providers throughout the country revealed that during August 2018 at least 387 women on temporary visas accessing support services in Australia were experiencing violence.

Almost one in four of those women and their 351 children or dependants were living in crisis accommodation while one in ten of the women were living at home with the partner, increasing the risk of experiencing further violence.

The survey highlighted crisis and long-term housing, followed by financial assistance, as the most needed services that organisations were unable to provide to clients.

The report identifies issues faced by women experiencing violence on temporary visas as a “national crisis which requires immediate law and policy reform by the Australian and State and Territory governments”.

The National Advocacy Group on Women on Temporary Visas Experiencing Violence makes a number of recommendations to ensure women on temporary visas can access essential supports they need to be safe.

They include reforming the “family violence provisions” of the Migration Regulations 1994 and the expansion of eligibility for Centrelink and Medicare, social housing and other government support services to include women on temporary visas.

The report “Path to Nowhere” can be found here.