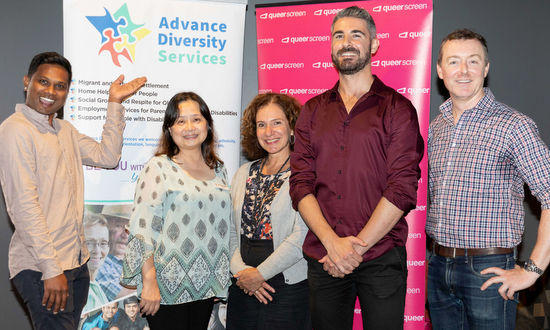 ‘”It was a good roll-up,” said ADS CEO Antoinette Chow. “And the film, which tells the tender coming out story of Van, was a soft entry point through which to raise awareness in the CALD community about LGBTIQA+ issues.”

A short version of ADS’s video Pride in My Faith, which offers candid testimony from three CALD LGBTIQA+ people of faith about how they bring their sexual diversity, faith and culture together, was shown prior to the feature.

Show bags handed to cinemagoers contained a link to the full version of Pride in My Faith, information about ADS’s inclusive services and the latest Multicultural LGBT Support Directory.

Antoinette Chow and Cheryl Kavanagh, Co-Chair of Queer Screen, also spoke on the night – emphasising the benefits and success of the ADS-Queer Screen partnership.