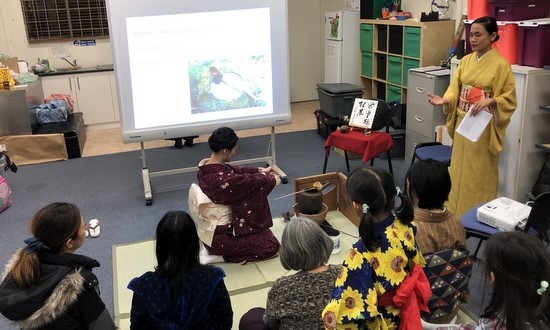 A flourishing Japanese language school and an active Japanese arts and culture club are two fruits of a relationship formed by Advance Diversity Services (ADS) just two-and-a-half years ago in a local playgroup.

“One of our social work students from a Japanese background helped us form the connection with the Japanese Playgroup in Oatley,” said Jenny Tang, Community Development Officer for ADS’s Settlement and Community Services Program. “Our relationship with the Japanese community in our region has since gone from strength to strength.”

From the playgroup connection, ADS met with Japanese community leaders and members to identify community needs. That led to a successful Bayside Council community grant application.

This two-part funding offered an equipment grant to start up a Japanese language school in the St George area and also a community grant to start the Japanese Arts and Cultural Club (JACC).

“The Bayside Japanese School is now officially registered with the Department of Education with more than 50 students attending,” said Ms Tang.

The Bayside Japanese School, launched in January 2020, operates at Kyeemagh Public School and runs weekly during school terms. A satellite school for high school students has also commenced in Rockdale.

“These are places where children and young people from Japanese and other backgrounds can learn Japanese in a safe and supportive environment,” Ms Tang said. “This strengthens their cultural identity and ensures multilingual skills are valued and maintained. It’s a great initiative.”

“The club’s sessions have been fun for all ages,” said Mrs Sachie Gamo from the JACC and language school, “and they’ve really brought the emerging Japanese community in Rockdale together. The Japanese cultural festival – which the JACC helped organise at Kyeemagh Public School in February 2020 – was a special highlight.”

Ms Tang said the Japanese community in the region was growing and more than 350 people from the community had benefited from the school and the club.

Mrs Gamo agreed they had made an impact.

“We’ve seen increased knowledge about and interest in Japanese culture and language, employment opportunities for language teachers and local artists, greater community cohesion and sense of belonging, and better engagement with local services.

“We’d call this a stellar achievement.”