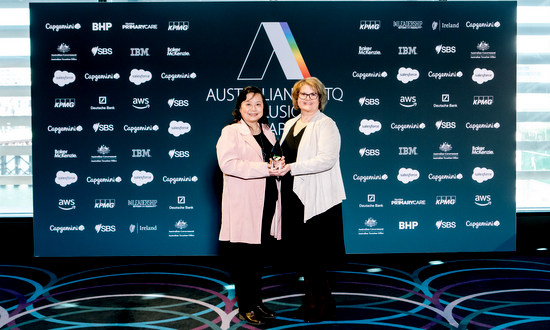 Advance Diversity Services (ADS) has been chosen as an HWEI Gold Tier provider for the second year running in the Australian LGBTQ Inclusion Awards.

They also acknowledge leaders, individuals and networks that have made a significant impact on LGBTQ inclusion within their workplaces.

Chief Executive Officer, Antoinette Chow, said it was an honour to receive the award two years in a row – an acknowledgment that paid tribute to ADS’s sustained work in fostering and celebrating LGBTQ inclusion.

“Happily, it means our inclusion campaign ‘BE YOU WITH US – You belong, we all belong’ is now fully embedded and that we’re steadily improving access and equity for people who identify with a diverse gender and/or sexuality,” she said.

“As we grow further as an inclusive organisation, we hope to be a lighthouse to other CALD providers.”

Initiatives taken since ADS received the Gold award in 2020 have included:

Ms Chow commended the Network of Alcohol and Other Drug Agencies (NADA), the peak organisation for non-government alcohol and other drugs services in NSW, that also received a Gold Tier provider award in 2021.

“We’re in good company receiving gold,” she said, “and inspired by the efforts of other non-profits like NADA who are making a difference.”